How to host a static site on bunny.net CDN with automatic deployment

bunny.net is one of the few european CDN providers and it is the perfect service to host fast and reliable static sites. This guide works for sites generated with static site generators like Jekyll, Ghost, ect. I use bunny.net for my personal website (constantingraf.at) and I will use this site as an example for this guide.

I used to run my website on a nginx server in a docker container. The big advantage of using a bunny.net is that it I do not have to maintain and update a server. After deploying the site everything is maintained by the service. A nice side effect is that it has very fast response times everywhere around the world. This is not that important for my personal site, but it is nice to get this on top and for sites with more traffic this can be very usefull.

First you have to create a storage zone. During the deployment we will store the website file into this storage zone.

Warning: Choose the regions wisely, because it is currently not possible to change the main region or remove GEO replication regions after creating the zone. It is possible to add repications afterwards so maybe try less and add later. 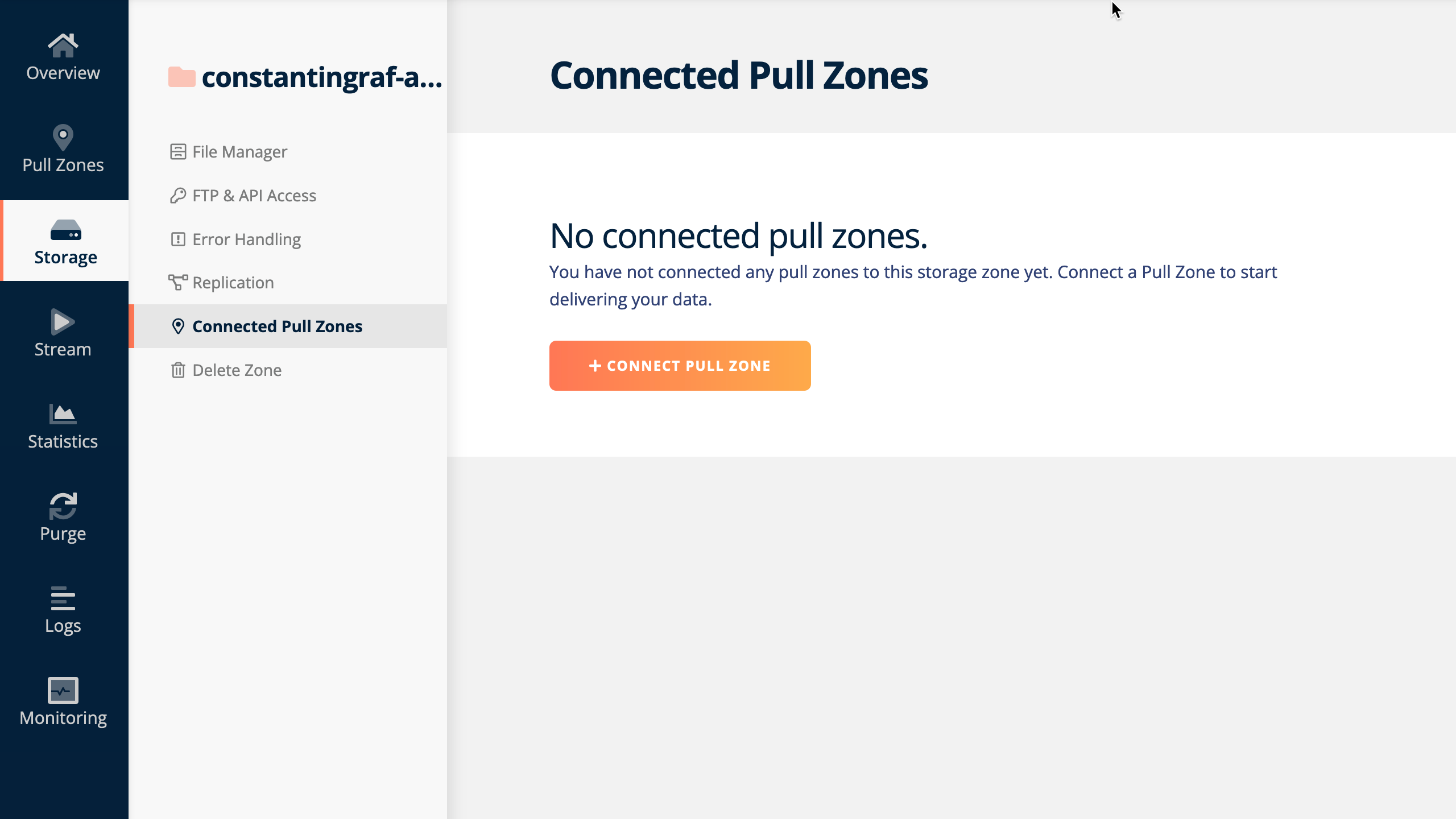 Give the pull zone a name and choose the zones. Click "Create pull zone".

Add the hostname that your want your site to run on. Click "Add" and set the CNAME DNS record.

After the record is set and the SSL certificate is created, activate "Force SSL" to force users to use HTTPS for all requests.

To make this work, we'll need two API keys. One for the edge storage to upload the files and one general API key to purge the cache of the pull zone.

For the general API key go to the Account Settings and

4. Use CLI tool for deployment

For the automatic deployment I'll use GitlabCI and the node cli tool BunnyCDN CLI. The commands have few requirements, so it should be no problem for someone who is familiar with another CI tool to adapt the whole thing with little effort. It is also possible to just the commands locally for example in a bash script.

Before the first deployment you have to set the evironment variables.

BUNNY_STORAGE and BUNNY_PULL_ZONE contains the name of the edge storage and the pull zone. In this case it is both constantingraf-at-prod.

After running the pipeline (or the bash script) your website file should be visible in the edge storage and the website should be up and running.

Running a static website over a CDN is generally already very fast. Storing the files in edge storage in multiple regions around the world makes an already very fast setup even faster and also ensures that cache misses remain fast.

Bunny.net has a very affordable pricing model. There are no monthly minimums and the traffic is pretty cheap. For the registration you have to add $10 of credit.

Traffic costs depends on the region starting from $0.01/GB in Europe and North America up to $0.06/GB in the Middle East and Africa.

The edge storage in Europe and Noth America costs $0.03/GB.

Calculation example: With the $10 that you charged your account you host sites with 1GB storage ($0.03) for 3 years with an average of 25GB of traffic per month.

Use the chat in the right bottom corner